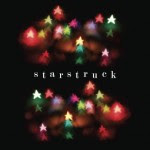 In your face sarcasm, biting social commentary and laugh out loud snarkiness make Starstruck one hilarious young adult novel. Gwendolyn (Dough, for short) is starting her junior year and dreading it. Far from the social butterfly, Gwen likes the shadows and wishes she were invisible, but it's hard to blend in or disappear when you've put on seventy pounds. If that weren't bad enough, Gwen gets an email that Wish, her best friend since grade school, is about to return to New Jersey. They have been long distance "dating" for the past couple of years keeping in tough via email and Facebook, but Wish has no idea that Gwen is overweight. He is in for a HUGE (pun intended) surprise.

Gwen is horrified and only has three days to get in shape. She practically passes out doing Billy Bank's Tae Bo tapes. When Gwen sees Wish again, she about faints--he has turned into a beautiful, well-toned Greek god. He doesn't seem to notice her weight at all; there's something strange going on here. Gwen's mom hires a creepy guy with an attitude to work at the family bakery; the new hire has an idea that all is not right with Wish.

Strange weather patterns develop and Gwen's sister Evie has an unexplained fever that sends her to the hospital. Weird things are unfolding in Cellar Bay--and it all began when Wish came to town.

Readers will laugh at Gwen's descriptions; when describing her family's lack of wealth, she calls them a, "coupon-clipping, water-down-the-ketchup-to-make-it-last-longer kind of family." When describing her younger sister's naivete, Gwen calls Evie "Nai-Evie."

A new kind of paranormal book, Starstruck is a winner.

Recommended grades 7-up. The words "sex" and "virgin" are mentioned in passing. No details. No characters engage in sexual activity.

FTC Required Disclaimer: I received this book from the publsiher. I did not receive monetary compensation for this review.
Posted by Pamela Thompson at 11:33 AM