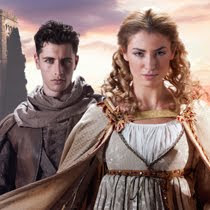 In book one, we meet Luca Vero, a wonderfully hot hero who is expelled from his monastery and sent on a journey across Europe to witness the greatest fears of the "end of times." Luca must investigate when the church hears of evil in its midst.

He arrives at the Abbey of Lucretill (near Rome) to investigate the "madness" among the nuns. One sister has bleeding palms and sleepwalks; others can't sleep at all. All of them are fearful that demons are among them.

Isolde is sent away from her castle by her brother; he takes control of their inheritance--Isolde is, after all, only a girl, not someone who can inherit. She is told that her father wanted her to enter the church and never marry. She becomes the Abbess of Lucretill and travels with her mysterious servant to the abbey's walls.

Soon, Luca must interview the nuns about the strange happenings in the abbey; first, he must have the Abbess's permission. He is intrigued by this young abbess who hides her face in the gloom. Further, he wants to get to the bottom of the mysterious and evil doings.

A compelling secret is discovered on the lands owned by the abbey and Luca has a pretty good idea of who is hiding it. He investigates his hunch helped by Isolde. What they find will threaten the abbey and Isolde's life.

Books two and three promise to develop more of a romance between the two main characters. While Isolde is meek and pliable in book one, Gregory reminds readers in the author's note that Isolde is a typical girl of this time. A girl whose future lies at the hands of her father and brother. I wish the author's note was at the beginning of the book for teen readers to understand why Isolde has such a meek character. She's forced into a life she didn't choose and she seems to just go along with it; which is what any girl of her time would naturally do. At the end of Changeling, Isolde chooses her future for herself, and female readers will applaud.

Highly recommended for mature readers who love history. Rich in detail and brilliantly researched, Changeling will have its fans among those who love the middle ages and European history. Some mature content, no language.

Grades 9-up. A lot of church history and tradition.

Posted by Pamela Thompson at 11:17 AM