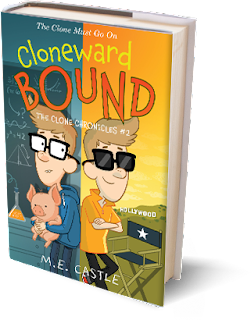 Fisher Bas is witty, intelligent and sarcastic and he's going to need to use all his talents to locate Two, his self-made clone who has gone to Hollywood in search of his mother. Fisher used some of his scientist mother's accelerated growth hormone to clone himself; he figured he could get more accomplished if there were two of him. What he hadn't counted on was that Two became a "rock star" at school. Suddenly, nerdy Fisher Bas becomes  cool Fisher Bas. As Two gains more fans, he develops his own personality and decides he has a mind of his own.

Fisher is now in more trouble than he thought he was. Now government types are asking a lot of questions at his mom's work; they want to know what happened to the missing ACH (accelerated growth hormorne). When Fisher's class has a chance to visit the set of "Strange Science" in Hollywood, Fisher jumps at the chance! He will use the opportunity to look for Two.

As the students are boarding the bus, Fisher throws out this random thought, "'School bus' is the normally used term because "asylum on wheels" is considered impolite." It is observations like this that young readers will love.

Amanda Cantrell starts stalking Fisher and soon he spills his secret. Together they snoop around Hollywood. Fisher swears that someone is spying on them; he's worried about the government discovering his clone before he can get to him. Who are the people following Amanda and Fisher? Where is Two? Just who is Dr. Devilish anyway? Can Fisher and Amanda clear Fisher's mom's name?

You don't have to read book one to understand book two, but really, why would you want to miss it? Both books are clever, quirky and fun. Castle mixes weird science with snark and playful middle school mirth.