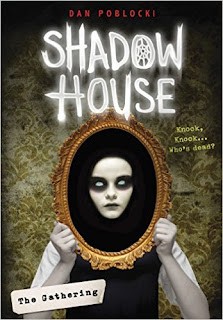 "Shadow House has everything I love--strange characters, magic and the supernatural, endless danger and adventure--and a mystery I dare any reader to try to solve. I can't wait to read the whole series!"--R.L. Stine, author of Goosebumps (from the ARC mailing)

"Enter Shadow House, if you dare"...beware who you trust and try to remember the way you passed, but that won't be enough. In Shadow House, passages change, doors appear and disappear, strange children threaten from the shadows. Something bad has happened here and for the new kids, they have to solve the mystery in order to free themselves from the hold the house has over them.

Strangers orphan Poppy, twin child actors Dylan and Dash, musical prodigy Marcus, and shy girl Azumi meet at the abandoned edifice of Shadow House, each being summoned there for different reasons. Poppy thinks she's meeting her great aunt Delphina who will give Poppy a "forever home." Marcus thinks he's accepted into an exclusive music program. Dylan and Dash think they're set to star in a new series and Azumi wants to escape the Pacific Northwest, her sister's strange disappearance,  and attend an East coast boarding school. The children enter the stone building and are intrigued by its vast grandeur but mystified by the look of the place. It looks abandoned--as if lost in time. The furnishings, paintings, and even some paperwork in an office look to be decades old.

As the kids begin to investigate, they split up (never a bright idea!) I guess these children have never seen a scary movie or read a scary book. As they are separated, each encounters a strange child in an animal mask. The apparitions begin to threaten them. The kids are going to have to work together if they expect to survive Shadow House!

Wildly imaginative and spooky, readers may have to sleep with the lights on!

There is a FREE app in the works for  phones or tablets at Shadow House. Create a username and password and log in. you can read ghost stories, "...where the choices you make determine your fate."

This is a Scholastic book, so I am sure it will be a huge seller at back to school and fall book fairs. Keep your eyes open, books 2 and 3 are scheduled for January 2017 and September 2017 respectively.


Posted by Pamela Thompson at 10:07 AM No comments: