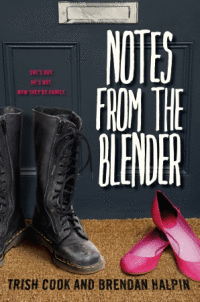 Cantagious, comedic, cantankerous, and full of teen angst and teenage spasmic hyperbole, Notes From the Blender is a hilarious romp of a ya novel. Told in chapters by Neilly and Declan, both male and female readers will laugh out loud at the characters and most likely, their very own foibles.

Dec misses his mom who died in a car accident--Dec was in the car but not injured and has blamed himself for her death since then. Dec's dad is worried that Dec is getting becoming too goth and dark and sends him to his Aunt Sarah's church which happens to be a little different than most churches--she is the paster and her life partner, also female lives with her. When Dec's dad springs the news on him that he is remarrying, Dec goes off the deep end.

Neilly is thrown for a loop when her father leaves her mom for a man! Now her father is marrying that same man. If that isn't enough, her mom has been hiding secrets from her, too. When Neilly goes home from school one day, she walks in on her mother cooking in the kitchen wearing nothing except a towel. Dec's dad is playing house with Neilly's mom! And that's not all, they are getting married and expecting a new baby. Neilly and Dec will become step-siblings....

Laugh out loud, swallow-your-milk-and-choke-on-it-until-it-comes-painfully-out-your-nose funny--this is the funniest novel of the year, and I would say it is bound to garner all sorts of ya and YALSA attention. Anyone with a sense of humor will love this book. I love Dec and Neilly!

There is a book giveaway posted on my blog for Notes From the Blender. Deadline for posting is June 14, 2011 at noon. Don't miss your opportunity to win a free copy. Post your comment today.

FTC required disclaimer: I received this book from the publisher. I did not receive monetary compensation for this review.
Posted by Pamela Thompson at 11:39 AM