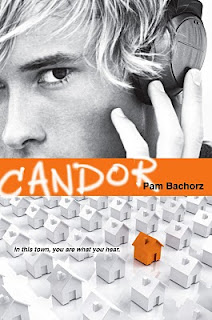 The messages are everywhere. Broadcast day and night, even when you are sleeping. The messages control your mind, all your thoughts are not your own. Oscar Bank's father created Candor, a "perfect" town in Florida. He sells homes to people who wish to create their perfect lives with their perfect children. Even the parents are fed subliminal messages to control behaviors. You want to lose weight? Quit smoking? Get rid of all your bad habits? Just put your name on the waiting list for a house in Candor.

Oscar's father has actually invented a new addiction: aural addiction, the addiction to listening. If you decide not to listen to the tapes, or cd's or music, you start to go through a form of withdrawal: migraine headaches and even suicide attempts can follow.

Oscar is strong. He fights the messages. He learns to listen to his own Oscar-made messages that override Candor's messages. He never lets on that he helps kids escape town. When there is a run-away, he is never found. Oscar is building quite a bank account--the kids pay him to help them escape Candor.

His one faltering step, a girl named Nia, is threatening to topple Oscar's enterprise. This book is highly original. This novel sparkles! Kids who like dystopian fiction or a strong male protagonist are sure to like this one.

Highly recommended for YA collections. Grade 7-up.

Posted by Pamela Thompson at 9:58 AM No comments:

The Dead-Tossed Waves
by Carrie Ryan
Delacoute Press, 2010.
407 pages
The second novel in the expected trilogy by Carrie Ryan is much darker than The Forest of Hands and Teeth.
It's darker, bloodier, and scarier.
Gabry has always heard stories--stay away from the forest. Don't go beyond the barrier wall, but one night, Gabry dares break the rules and goes over the wall with Catcher, a boy she's infatuated with. Others go with them to the old amusement park. It's not long before the Unconsecrated (Infected Mudo) scent them and want to feed.
Gabry is able to get away, but the others are not so lucky. She sees Catcher bitten and knows he only has days, or hours, to live. Gabry meets Elias who knows far more than anyone else about the Unconsecrated and the Mudo.
A cult group of nomads called the Soulers demand blood sacrifices, and the story gets murkier and even more twisted. This new world, post-plague, dreamed up by Ryan is a dangerous one. One that some readers may not enjoy. If readers can get through some of the bloodier passages, the book does offer some hope at the end.
Recommended for those readers who like edgy novels. Some sci-fi fans will probably enjoy this novel. NOT recommended for readers under grade 8.
Violence and gore. Grades 8-high school.
Posted by Pamela Thompson at 8:51 AM No comments: 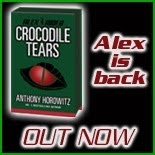 Crocodile Tears (Alex Rider series, book 8)
by Anthony Horowitz
Philomel Books (Penguin), 2009.
385 pages
It's been ten years and eight books since Anthony Horowitz introduced the world to Alex Rider, teen spy. MI6, Britain's intelligence agency, has been using Alex since the death of his uncle who was, in fact, one of their top spies. Alex learned to drive motorcycles and fast cars and learned hand-to-hand combat and martial arts under his uncle's tutelege. This makes him the perfect fit for MI6. Another reason the agency loves him--no bad guys would ever suspect a 15 year old school boy as a spy.
Crocodile Tears is energetic, thrilling, and a taut adventure. An ex-con brilliant madman turned billionaire who has convinced the world that he is a man of God, Desmond McCain, runs an international charity named First Aid. Using this charity, McCain collects millions of dollars from wealthy nations who channel it to his charity to sites of international tragedy. First a nuclear accident happens in India and then a planned famine in Africa. McCain causes each tragedy to happen and then uses his charity to make billions for himself. His ego-maniacal view of the world makes him dangerous to everyone, especially Alex, when he stumbles upon McCain's plans to infect millions of people and animals in Africa with a genetically infected wheat.
Readers who enjoy espionage, terror, and adventure will like this books. Fans of earlier Alex books will like this one. Recommended for YA collections grades 5-up. Suitable for high school adventure and espionage readers.

Posted by Pamela Thompson at 12:06 PM No comments: