Hey, Y'all, I Moved Across the Country! Sorry for Fewer Reviews Recently ;)

I've made a huge life move! Our home sold in ONE hour and was not even on the market. We had only three weeks to find a short-term rental in Florida that was pet friendly and furnished. I rented it ONLINE and took a chance that it would be okay. 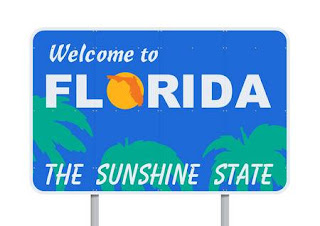 We gave away, threw away and left behind most of our stuff and put the rest on a moving truck to Florida and to storage. I drove nearly 1500 miles to the east coast of Florida where we are staying in Jacksonville. Immediately, we searched for a home to buy in Daytona Beach or Port Orange. We found our home in two weeks and were under contract immediately.

Currently, we are waiting for Hurricane Dorian to leave us alone, so we can live our Florida dream, lol! At least I came to Florida just in time for the first hurricane of the season, right?

So, cross country move, 1500 miles, sold a house, bought a house, got rid of belongings and lightened our load and mood. Changed my latitude to change my attitude! 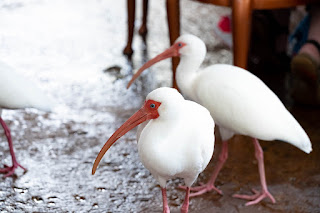 This is why there are so few postings on the blog for July and August. But now, if Dorian is kind, I can get back to what I love: the WORLD OF FICTION! 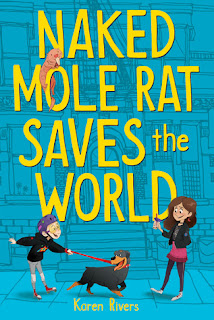 Naked Mole Rat Saves the World is just what readers expect of a Karen Rivers' book: quirky, funny,  and heartbreaking. kit (spelled with a lower case "k" because she's so small) is dealing with more than just "normal" middle school problems. Her mother struggles with mental illness issues. Her mom used to be a famous singer, but now she's so anxious, she can't leave the house. In fact, she's  so anxious that kit is named after her mom's tattoo: k.i.t. which means "keep it together," and kit turns to this phrase throughout the book.

kit's best friend Clem was injured after a fall during the show "The Most Talented Family in America," and now she's shut herself off from kit and their friendship. While Clem deals with depression, kit tries to navigate alone.

Young readers will empathize with the friendship between Clem and kit and the loss kit feels as she wanders. Rivers' characters are believable and lovable. kit will remain with readers long after they close the book.
This is one read with tons of heart and will likely lead to spirited discussions in middle grade book clubs about anxiety, depression, friendship, mental illness in families and how to seek help. I received the ARC of this book which did not contain phone numbers for depression or mental health helplines. The finished book is likely to include toll-free numbers and how to seek help. It would be a plus to include questions for book clubs as well.

Highly recommended for readers who enjoy great characters and value friendship and compassion. Recommended for any middle grade book club and whole class reads. Grade 5 and up.

Posted by Pamela Thompson at 11:11 AM No comments: 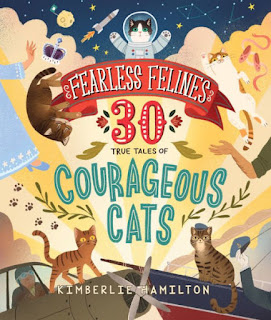 Thirty true stories of fearless and daring felines who saved their owners, fought in wars, and patrolled buildings make this middle grade book a treasure trove of fun facts about brave cats. Any young cat lover will revel in the clever antics of each character--and what characters they are!

Cats may not have their place in history books, but author Kimberlie Hamilton insures that young readers will know about them. The ancient Egyptians worshipped cats and believed them to be gods. Cats came to Britain around 55BC when the Romans invaded. From that moment on, cats became important in castles, breweries and businesses to chase and kill vermin. By 1995, cats begant to outnumber dogs as America's favorite pet.

Kid readers will love impressive cats like Pyro who flew missions with his pilot owner in WWII and was considered a good luck charm among all the flyers. A cat aptly named Bomber could tell the difference between Royal Air Force planes (British) and enemy (German) planes during the war. When he alerted his family, they ran for the bomb shelter. A stray cat named Hammer appeared at Army headquarters in Iraq. Not only did he keep them mice-free, he was a therapy cat for wounded soldiers, and he came to the United States when the troops came home.

There are stories of other cats saving their family from fires and attacks from other animals. Some cats have even detected cancer in their owners! So, if your cat is behaving badly: pawing at you, bothering you, creating a ruckus, there's probably a good reason he is trying to tell you something very important. Cat behavior is fascinating to watch and to read about. This little collection is full of TALES about TAILS!

Recommended for non-fiction projects and for cat lovers everywhere. Grade 4 and up. With index, glossary, quiz with answers, further reading and recommended websites.

Dinosaur Pick: Everything Awesome About Dinosaurs and Other Prehistoric Beasts! 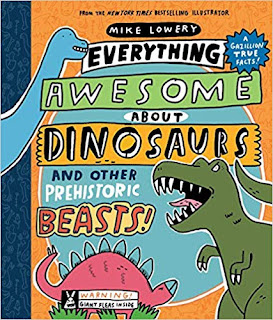 Everything Awesome About Dinosaurs and Other Prehistoric Beasts!
by Mike Lowry
Illustrations by the author
Orchard Books
128 pages
ISBN: 9781338359725

Easy and fun to read, this book is accessible and hilarious and fans of Dav Pilkey will cheer! Dinosaurs come to life in funny comic fashion. True to the cover factoid, "a gazillion true facts!" this beauty delivers hours of entertainment. A section on how to draw dinosaurs offers would be artists and cartoonists a how-to guide.

Give this to any dinosaur fan and expect them to do a happy dance! This may be the most checked-out book at elementary libraries. For those librarians who purchase this one, you should invest in more than one copy as I see this being checked out again and again.

A MUST READ! Highly, highly recommended for every dinosaur fan and every library grade 1-high school. Even teen readers will find this an appealing read. Reluctant readers will be enthralled.

FTC Required reading: I received this ARC from the publisher. I did not receive monetary compensation for this review.
Posted by Pamela Thompson at 11:55 AM No comments: