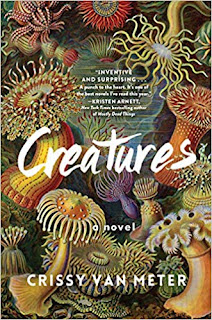 Creatures is a introspective study of a broken family: a mother who follows her own arrow wherever it may lead, many times far away from her young daughter, a father who knows more about creatures of the ocean than he does his own precious creature: an impressionable, quiet, often lonely daughter who craves her father's attention and love. Evangeline worships her father, an alcoholic, druggie who provides weed and coke for most of their island. The island itself, Winter Island, just off the coast of Northern California, often battered by storms and forgotten by time.

Growing up, Evie parents herself, going hungry and sometimes homeless, crashing at millionaires' homes, hanging out with Playboy bunnies, and pro athletes when they take an island rental or camping in a tent when her dad loses everything.

The book opens before Evangeline's wedding. Her groom is out at sea and a storm threatens his return and even his life. A whale has beached itself and lies rotting on the beach. That whale becomes a symbol of everything that is wrong with Evie and her mother. Her mother shows up with no notice and pretends to care about Evie's wedding. Evie grits her teeth as she tiptoes around her mother in order to create no waves.

The story is told going back and forth in time to child Evie and her dad's failures and abysmal parenting, and how it has affected Evie's lack of emotion. She cannot feel anything at all. Things that would break another person, Evie treats with no human emotion. It is interesting to see a character who appears stoic but is the most tragic person in the entire book.

Recommended for those who enjoy a character study and those who love tangled family relationships. There is no one in Evie's life who is able to help or save her from herself. Creatures is a sad, yet beautiful, book. The cover art is spectacular!

Adult book clubs may find much to talk about in this book, if they can pour more wine.

Posted by Pamela Thompson at 11:04 AM No comments: