YA Pick: In the Neighborhood of True 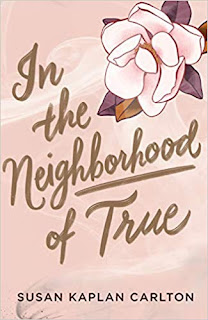 Don't be fooled by the pretty pink cover and precious corsage; this pink book is one of the most important books of the year. Set in 1958, the message is timely today: love your neighbors. Don't judge people by the color of their skin, their religion, their family lineage, their financial status or their outward appearance. Judge them by the quality of their character. Sound familiar?


When her father dies suddenly, Ruth's family is forced to leave their urban lives in Manhattan and move to her grandparent's estate in Atlanta. The year is 1958 and race relations are at a boiling point in the South. Ruth is enrolled in an exclusive private school where girls of her privilege are given a genteel education.

Debutante season looms, and fish-out-of-water Ruth finds herself in lessons to learn how to be a Southern lady. No one has asked if Ruth is Jewish, and she never mentions it. Her mother is mortified and accuses Ruth of "passing" as a white deb, not a Jewish girl. Ruth wants to fit in and not cause trouble. Ruth joins the "pastel posse" of debs and hopes to be crowned Magnolia Queen like her mother and grandmother before her.

Ruth meets handsome golden boy Davis Jefferson and accepts an invitation to a dance. Soon she's dating him and falling in love. Everything is wonderful, and Ruth loves her new life.

In the "separate but equal" Jim Crow South, Ruth learns that Negros have to sit in the balcony at the movies and drink from different water fountains. She grew up in Manhattan and has never seen this before although she has to admit in her old neighborhood, she has rarely seen a person of color. The rabbi at her temple wants his congregation to support equality for all people, but  talk of politics and racial tension frighten Ruth.

When her temple is bombed, Ruth discovers Davis was there that night. He swears he had nothing to do with it, but Ruth suspects he's telling, "in the neighborhood of true," a lie. Ruth has a decision to make: embrace her religion and family or deny her background to live a lie. If she doesn't speak up, what kind of person is she?

Readers will love "vintage" details that bring the era to life, and cheer for Ruth as she navigates society and religion. Algonquin has another book winner! In the Neighborhood of True is sure to be on the top of every award list this year! The author does a brilliant job of creating unforgettable characters whose everyday decisions are complex and often unexpected.

Kudos to Susan Kaplan Carlton for bringing history to life and telling a story based on the real life bombing of the Hebrew Benevolent Congregation (The Temple) in Atlanta in 1958. Five suspects were arrested; one went on trial twice, yet all charges were later dropped.

Highly, highly recommended! You MUST read this book. It is amazing. In the Neighborhood of True would be a great whole class read and YA Teen Book Club read.

Posted by Pamela Thompson at 12:23 PM No comments: 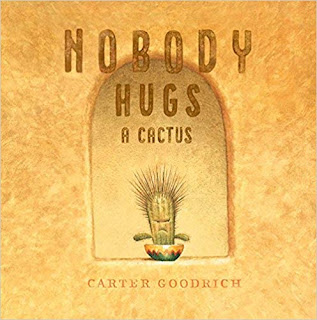 Hank the cactus lives alone, and that's all right by him. He doesn't need anyone. Once in awhile, someone will mosey by: Rosie the Tumbleweed, a cowboy, a lizard, an owl, but no one wants to give a cactus a hug.

Hank grumbles at all the visitors and is happy when they leave him alone. Hank is quirky, mean-spirited and rude to everyone.  For a long while, no one comes by. Hank wonders where everyone has gone. A paper cup blows onto Hank, and he can't get it off. Lucky for him, Rosie comes by and helps him.

Hank grows a beautiful flower to give to Rosie the next time she comes by. When he presents his very own flower, Rosie hugs him, and tumbleweed and cactus get stuck in a hug! My favorite line of the book is, "After all, it's better to be stuck in a hug than stuck all alone."

Cover art depicts a scowling Hank all alone in a window. By the last page, Hank and Rosie are hugging and all smiles.

Recommended age 2 and up. This fun read will introduce young readers to the desert and its creatures, and the lesson about friendship and family is a bonus!

Posted by Pamela Thompson at 12:17 PM No comments: