Battle of the Battle Books: Unconventional Warfare vs. On Blood Road 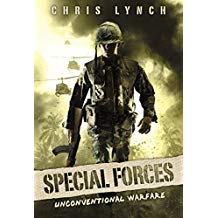 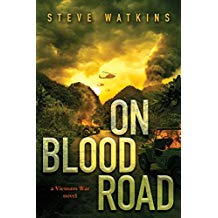 Two high-interest war stories by two talented Scholastic writers are coming soon. It is a nice thing to see Scholastic offer other books on war other than World War II and the Holocaust. It appears that the Vietnam era is finally being addressed for younger readers. Scholastic is marketing these titles for age twelve, but both books are gritty, and Unconventional Warfare has an older main character. I think the reading level is okay for younger readers and reluctant readers, but the content and gore may be better suited for high school readers, especially those reluctant readers who need a fast read. Both books are quick reads and few pages.

Special Forces: Unconventional Warfare features main character Danny Manion who is always ready for a fight. When fighting gets him in trouble and ready for sentencing, Danny is given the choice: go to jail or join the military. Danny opts for the military and is assigned to SOG, an elite group of covert fighters which include members from SEAL teams, Green Berets and the CIA. Fast-paced action will keep readers captivated.

On Blood Road is a grittier read. Taylor Sorenson is not a soldier; he's in Vietnam to visit his father who works at the U.S. Embassy. When Taylor sneaks away from a fancy dinner to go see the Tet celebrations, chaos erupts and he is captured by the North Vietnamese Army. Younger readers may find this book too gory for their tastes, but Watkins delivers on details and panic.

Give these reads to readers who have enjoyed Lynch's WWII series and non-fiction fans who read about war and warfare.

Both books are recommended grade 9 and up. In my community, these titles would not be in the middle school library.

FTC Required Disclaimer: I received the ARCs from the publisher. I did not receive monetary compensation for this review.

Posted by Pamela Thompson at 1:09 PM No comments: 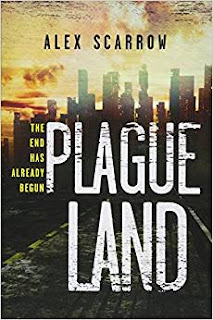 In this scary sci-fi dystopian novel, main character Leon watches a news story about  a horrific virus that has broken out in Africa. His mother tells him not to worry; they're so far away in England. Within a week, the deadly sickness has spread to England, and it's terrifying.

Bodies liquify and turn to "juice."Entire cities are wiped out. The strange thing is that the way the plague seems to be moving, as if it's adapting. Humans are on the run, but there is no outrunning whatever this is. It  may be the end of the human race.

The ending leave an opening for a series, and YA fans will not want to wait long to pick up the sequel.

FTC Required Disclaimer: I received the ARC from the publisher. I did not receive monetary compensation for this review.
Posted by Pamela Thompson at 6:00 AM No comments: