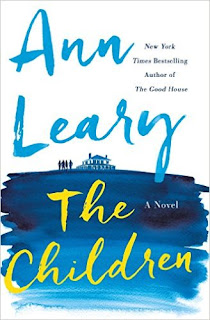 Praise for The Children:

“In this deeply satisfying novel about how unknowable people can be, intrigue builds with glass shards of dark humor toward an ending that is far from comic.” ―Kirkus, starred review

“The Children is populated by comically quirky characters reminiscent of Anne Tyler at her best. But in Ann Leary's capable hands, they come alive as funny, wise, sometimes confused but always hopeful as they navigate a plot rich with unexpected turns. Leary's unique voice and perspective make this the novel you won't be able to put down this summer.” ―Ann Hood, author of The Obituary Writer

"[Leary's] characters are a delightful blend of strong personalities, all with their own little touch of delicious evil, and her darkly comic send-ups of New England wealth, nouveau riche, and Internet culture should keep readers absorbed until the final, most shocking secrets are revealed." ―Publishers Weekly

"A read-in-one-sitting romp, Leary’s wry and searing satire of affluence and elitism comically yet steadily builds to a sobering and malevolent finale". ―Booklist


Hypnotic, fantastic, provocative, dark and oh, so very captivatingly cunning, The Children is this summer's guilty pleasure. This novel has it all: a fairy tale family who has an old  money  background, a sprawling lake front estate,  a trust that patriarch Whit Whitman has in place after his death in which his two sons inherit and his widow and two step-daughters are allowed to live in the home until Joan's (his wife) death, secrets, lies, and mysteries abound!

Twenty-nine year old Charlotte never leaves the property. Her life revolves around her secret on-line life. She writes a mommy blog about her fictional family: her handsome, loving husband and her two beautiful children--all of whom do not exist except in Charlotte's fictionalized world. She gains giant corporate sponsors who pay her to basically blog. The diaper company, of course, has no idea Charlotte is a fake and neither do her millions of followers. Her blog is so popular she's one of the Top Ten Mommy Bloggers according to The Huffington Post. She hides her true identity by not using her real name and never posting photos of her "children," and she also invents fake blog readers who comment on her blog posts as if they are her real neighbors. All this chicanery is just enough for her to gain thousands of mommy blog readers.

The story is told through Charlotte's eyes, who is an incredible and novel storyteller. Readers will not know whether to believe Charlotte's version because she is a fake and a liar of supreme proportions.

Favorite son golden boy Dartmouth educated and athletic god Spin comes home to introduce the rest of his family to beautiful and charismatic Laurel, a girl who is too good to be true. Once a celebrated skier of Olympic talent, she sets her dreams for gold aside after an injury but still manages to excel in yoga and gains online near celebrity status. Stepmother Joan and her grown girls are ready to hate Laurel. Charlotte begins to engage in Internet sleuthing to discover flaws in Spin's new fiancé. Step-sister Sally doesn't question anything about Laurel's past and seems to accept Spin's choice.

There's something about Laurel. Something sinister. Behind that perfect smile and beautiful face lies the mind of a sociopath, and although she suspects something Charlotte has no idea of the consequences Laurel will bring upon everyone involved.

The property is worth millions, but sons Spin and Perry can do nothing to it as long as Joan lives. Their fate is sealed by their father's trust. Wedding plans are set into motion and everything leading up to the wedding begins to snowball.

Secrets are about to be revealed and readers will savor every gleeful word. If you loved The Girl on the Train and Gone Girl, you will love The Children.

I LOVED this novel! The narrator choice is sheer genius. Pick this one up and you won't be disappointed. 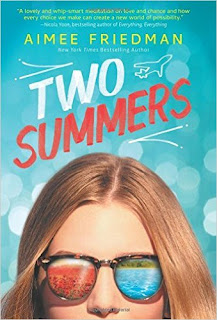 Sweet, upbeat (for the most part), fun, and entertaining, Two Summers will find its audience who long for a quick beach read. A fresh take on a parallel stories book. Summer Everett is excited to be going to France for the summer to see her absentee, somewhat famous painter father. He skipped out on Summer and her mother after being noticed by the art world. Summer's mother is less than optimistic to see her only child visit her father. Summer has conflicting emotions of whether she should stay home and watch while her  best friend Ruby falls in love or should she go into uncharted territory and visit her dream country France?  What if her mother is right? What if her father is less than thrilled to see her?

She opts for France. On the airline ramp, Summer's phone rings. It's nearly dead and she decides not to answer it. This one decision is the turning point of the book. It is the ring of an unanswered phone that seals the fate; it is the kismet that changes the outcome of each story. One story tells the story of Summer landing in France, finding her father's house, discovering his living situation and his absence (once again!), finding romance, following her mother's footsteps during her college years, seeing the same sights her mother saw, and learning that decisions made early in life have lasting repercussions.

The other story is the story of Summer staying home and seeing how a possible crush will play out. Either way, Summer will have to go through changes and make decisions. Family secrets are reveled that will change Summer forever.

A light, quick read for those long, hot dog days of summer. YA romance readers will be thrilled.

Posted by Pamela Thompson at 8:00 AM No comments: