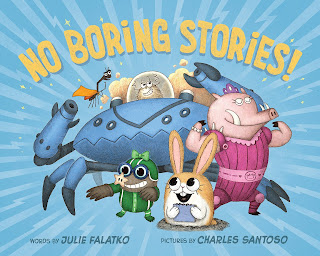 A mole invites his friends: a crab, a weevil and a warthog to write an exciting story featuring princesses, a giant robot suit, grapes, and lasers. A cute bunny who just won't go away keeps trying to tell his story and FIX theirs. The others don't want a story about cute, furry animals, birthdays and mommies.

Eventually they all work together to develop a story with a beginning, a middle and an end that they are all happy with and they celebrate as friends.

Funny, new words that young readers will want to include in their developing vocabulary are: mandibles, steed, humiliate, evidence, and discarded.

Posted by Pamela Thompson at 9:28 AM No comments:

YA Pick: Not Even Bones 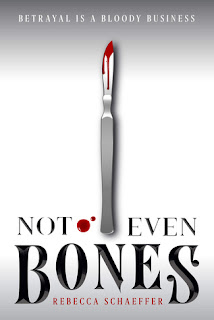 Gruesome, grisly and ghastly but all in the best ways, Not Even Bones lives up to its pitched comparisons "'Dexter' meets 'This Savage Song.'" Schaeffer goes in deep (pun intended) in her descriptions of dissections, body parts, the human meat market, cutting skin off the body, and meat hunters who enjoy eating their products. It's as if Jeffrey Dahmer has been cloned and is in the body parts smuggling business!

Nita has grown up with dead bodies and learned to take them apart, piece by piece. Her mother marvels at her butchery skills, but then  Mom brings home a live boy that she intends to sell off piece by piece. He was being kept by a collector in Buenos Aires, but her mother grabbed him and begins posting his body parts for sale online. Nita is fine with chopping up dead bodies, but she cannot bring herself to cut off the boy's ears or toes, so she sets him free, giving him  a bus ticket and her phone.

Nita knows her mother will be furious. That boy was worth close to $1 million, and her mother doesn't like to lose money. Even worse, her mother's punishments are legendary. Nita is taken away and loses consciousness. She wakes up in a high tech cage beside another prisoner who tells her they are for sale in the worst meat market in the world. Nita always knew her mother could  be cruel, but she had no idea the depths of her evil. Her mother sold her for profit. Nita is an unnatural herself and her parts are worth far more than the boy she set free.

In a world where humans traffic in fresh body parts of unnatural species, kill or be killed is the new norm. Not Even Bones begins the story with Nita fighting for her freedom. When she escapes her cage, she is sure she's beat death, but the surprise twist at the end blows up the entire book setting the stage for book two. Kudos to Rebecca Schaeffer for the BAM! surprise twist that will leave teen readers reeling.

Recommended grade 9 and up. For readers who enjoy gore and blood and are not bothered by grisly details like livers, hearts, cutting off digits or skinning live subjects.

FTC Required Disclaimer: I received the book from the publisher. I did not receive monetary compensation for this review.
Posted by Pamela Thompson at 3:20 PM 1 comment: