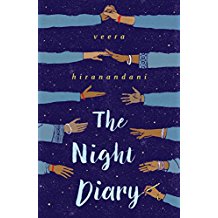 A compelling read for middle grades, The Night Diary is a series of letters (diary entries) written by twelve-year old Nisha to her mother who died in childbirth.

The year is 1947 and India is facing freedom from British rule. As the British move out, India struggles with religious upheaval and in-fighting. India splits into two countries with two religious groups. Pakistan becomes mostly Muslim and India mostly Hindu. The split causes millions of refugees to flee their homes.

Nisha's parents come from two religious backgrounds. Her doctor father is Hindu and married her Muslim mother (now deceased). The family  lives in what becomes Pakistan. Violence erupts around them, the kids are forced to leave their school. It is no longer safe for the family to stay in their home. Nisha is forced to say goodbye to the beloved family cook Kazi who is Muslim. Leaving under cover of  the night, her father, Nisha, her twin brother Amil and their paternal grandmother flee and attempt to cross the border into what they hope is a safer life. Along the way, Nisha witnesses violence and murder as overloaded trains carry the refugees across the border. They stay with Nisha's uncle (her mother's brother)  who keeps them safe until the children make friends with a neighbor girl which could put them all in danger. Uncle also tells Nisha about her mother and what kind of a person she was.

Nisha questions why all this fighting is happening. Why are people fighting and getting killed just because of their religion? Throughout the book, her father is closed off from the children. Nisha and Amil are rarely shown attention and never love from him. Nisha turns to her diary where she finds solace from the world around her and love from a mother she never knew.

The Night Diary tells a story probably unfamiliar to most western children. Even in history books, classes rarely get beyond World War I. More recent history, even American history, is never touched upon. The Korean War, Vietnam, the Gulf War may not even be mentioned.

The book is marketed for an older audience: grade 8 and up, but I question using a twelve year old narrator. I would place this book middle grades and important for its historical perspective.


Posted by Pamela Thompson at 8:53 AM No comments: