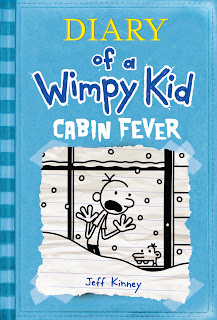 Creative, amusing, silly, and just plain fun, Jeff Kinney's latest book in the series is a must-have. Just in time for Christmas, Diary of a Wimpy Kid: Cabin Fever will delight any reader no matter what age. Charles Schultz did it with Charlie Brown and Peanuts, now Jeff Kinney's Wimpy Kid, aka Greg Heffley, and his shenanigans have taken over the reading market. This series is not just for children or boys, it is a gem with enjoyable characters, humorous situations, comical illustrations, and a lot of heart. The wimpy kid appeals to the wimpy kid in all of us.

Every kid has tried to figure out what gifts he/she is getting for Christmas, even unwrapping and rewrapping his own gifts, but probably none have gone to the trouble that Greg does. He knows one of his gifts is the video game he's been wanting to play, so he carefully extracts the disc replacing it with a hard rock cd from his brother Rodrick. He forgets to put it back and come Christmas morning, the cd rolls out of the case. Greg's mom is upset because the store sold her a Headless Asylum cd instead of a game fit for children. Greg's mom takes the cd back and complains of the "inappropriate content" being sold to minors. Of course, Greg does not admit that he switched the discs.

Greg isn't the only one in the family who does sneaky things. His mother gives him an autographed copy of a ya novel. When Greg takes it to the comics books dealer, the dealer tells him the signature is forged. It seems Mom didn't want to stand in line for three hours, so she just signed the author's name herself and passed it off as autographed by the author.

The wimpy kid is not going anywhere. He lives on in all of us, and Kinney has found a way of making us laugh at ourselves and remember all the nutty things we did as kids. Some of us will never outgrow wimpy kid, and that's a good thing.

Highly, highly recommended for everyone of all ages--especially those with a sense of humor.

FTC Required Disclaimer: I received this book from the publisher. I did not receive monetary compensation for this reveiw.
Posted by Pamela Thompson at 12:01 AM