Paranormal Pick: The Hallowed Ones 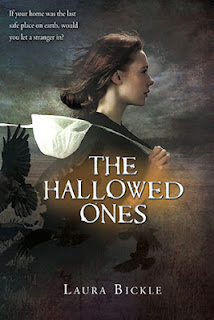 Mesmerizing, harrowing, scary, creepy, and compelling, The Hallowed Ones will have teen readers on the edge of their seats and up all night as they race through the pages of this smart new ya novel.

A closeknit Amish settlement is threatened by an epidemic from the Outside. When people vanish with no explanation and news from the Outside is that "something" happened, Katie and her childhood friend Elijah go to the next town to check on the whereabouts of Elijah's older brothers. What they find is eerie. The town seems deserted. There are no people about. Elijah's brothers are not at the furniture store where they work, but there are bloodstains left behind. The Elders tell the Amish community to pray and that God will take care of everything.

Katie discovers a young boy just beyond their fence. The Elders say that no one can leave and no one can enter; they are afraid that whatever is killing people may come on their land and infect them. Katie disobeys and carries the boy to the barn where she raises puppies. She nurses Alex back to health and he tells her about the Outside and what he has seen.


Alex is from Canada and was in the U.S. looking at universities and seeing a girl he met on the Internet. She was studying biology in the lab when the breakout occurred. Alex sees the "vampires" firsthand. These vampires are a cross between vampires, wolves, and super-fast, super-intelligent zombies. Think "I Am Legend" and "Resident Evil." They can plan and plot and they have speech. They also have an insatiable appetite for blood. Alex thinks the Amish are safe in their community because they live on hallowed,or blessed, ground. The "vampires" cannot attack holy places.

There is gossip that people are safe in synagogs, temples, shrines, mosques and other holy places. Even a coven of witches seems safe due to their pagan "religion."

When a whole family of Amish are murdered within the settlement, Katie and Alex have to clean it up. But who let the vampires in? And where are they?

The ending sets up for a sequel. If there's not a sequel, I will be surprised and saddened. Katie is a refreshing heroine with spunk and guts; she's not the little "mousehe men of her community cherish.

Highly, highly recommeded grades 7-up. One mention that Katie "lies with" Alex but not mention of what actually happens. Fade to black, ahem. Vampire creature violence and gore.

This review has been posted in compliance with the FTC requirements set forth in the Guides Concerning the Use of Endorsements and Testimonials in Advertising (available at ftc.gov/os/2009/10/091005revisedendorsementguides.pdf)
Posted by Pamela Thompson at 8:30 AM