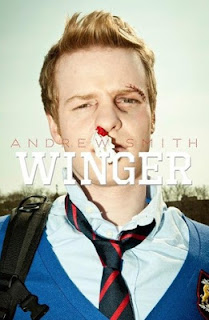 Winger is a top-notch YA read that will resonate with readers long after they have finished it. It is that rare book that speaks to all teens, male and female. Who doesn't love an underdog? And an underdog like Ryan Dean West speaks to the humanity in all of us.

Ryan Dean West is a scrawny 14 year old junior, younger than others in his class, but he's scrappy and fierce both on and off the rugby field at Pine Mountain. He's rooming with Chas--a real zero and the typical "meathead" jock-- in O-Hall (Opportunity Hall); O-Hall is the place the "really bad kids" are sent to on campus. Ryan Dean is sent there for hacking a cell phone account. Ryan Dean knows he has to watch his back in O-Hall and around Chas in order to stay alive.

Ryan Dean is clever and quick. He tells readers that at Pine Mountain, kids can't have cell phones or electronics. Ryan Dean says, "...the kids here actually talk to each other. And they write notes, too. I know these are both ridiculously primitive human behaviors, but what else can you do when your school forces you to live like the xxxx-ing  Donner party?"( xxxx-expletive)

Coach McAuliffe, the rugby coach, is from England and he is short (like Ryan Dean) and a former winger. Ryan Dean describes his coaching style, coach "...could talk the most civilized-sounding xxxx you would ever hear, and he could cuss you out with the most vicious obscenities and it would sound like he was reading from Shakespeare."

Ryan Dean describes the O-house chaparones Mr. Farrow and Mrs. Singer as "Satan's minions." When Ryan Dean isn't slamming into people on the rugby field, he's hoping to get Annie Altman, his best friend, to think of him in a romantic way. Friendships are tested when Ryan Dean strays, but good friend and rugby teammate Joey tries to keep him on track.

Winger is a terrific YA novel that will entertain and amuse readers, but it will also force them to face bullying, teenage cruelty and angst, anxiety, depression, fear, fitting in, and friendship. Be prepared to laugh and cry with Ryan Dean.

The ending is unexpected and traumatic; don't cheat and read the ending first. Get to know Ryan Dean. Live in his world, in his heart and in his head. You'll be a better person for it.

If you know any reluctant reader, this is THE book for him/her. Boys will empathize with Ryan Dean and girls will love him.

This review has been posted in compliance with the FTC requirements set forth in the Guides Concerning the Use of Endorsements and Testimonials in Advertising (available at ftc.gov/os/2009/10/091005revisedendorsementguides.pdf)
Posted by Pamela Thompson at 9:43 AM