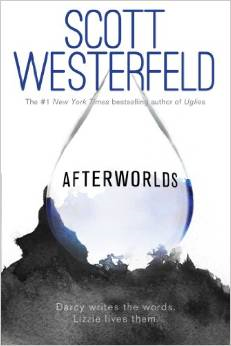 Dizzying, defiant, deviant, and direct, Afterworlds is a mash up of what every YA editor craves. It appears Westerfeld decided to hit every note that makes YA exciting: throw in paranormal romance, maybe a hot guy who just happens to be dead, make the protagonist an underrepresented ethnicity, make it a coming of age story, add helicopter parents who give in easily (yeah, right!), big city, bright lights and the siren's call of New York, the brisk publishing industry with its own sub-culture and jargon, a love interest--oh, but make it a lesbian relationship, add a few minor friends and write two stories in one and call it a bestseller. Sit back and collect the reviews and the revenues.

I was drawn to the possibility of the this novel. Much of it is good, if not great. The opening scene focuses on Lizzie (who is the protagonist of Darcy's soon to be published YA novel). The reader sees a terrorist attack at an airport where Lizzie is somehow transported to another plane (haha, pun not intended) where she meets hot death god Yamaraj. Maybe it's just me, but really, a hot death god? And Lizzie is not one bit squeamish?

Darcy's story is that of a recent high school grad who is lucky enough to have written a YA novel in thirty short days and sold it immediately to a publishing house in New York. She refuses to go to college, telling her traditional parents that she will be living in New York, thank you very much, and will be working on her rewrites while she waits on the actual publication date of her much anticipated novel. Darcy meets fellow deb writers at a cocktail party and becomes fast friends with one. Darcy is naïve and sheltered; she has never been in love or in a relationship, yet her parents agree to allow their young, naïve daughter to live alone in the  largest city in the nation? Without security and no doorman? In an apartment of her own choosing? (Westerfeld himself has no children).

I am a fan of Westerfeld's writing; so much so, that I gave Afterworlds the benefit of the doubt. I was excited to read Afterworlds; it is different from anything I've read. However, it seems at times the author is either pandering to the publishing industry or sniggering at the book buying masses. Judge for yourself. I have a feeling this is one book that will be buzzed about. Several times, I thought, "Genius!" and just as many times I thought, "Failure...."

Posted by Pamela Thompson at 9:14 AM