Book Giveaway and Q & A with Jon and Pamela Voelkel 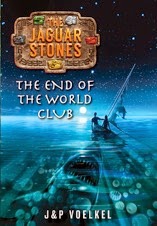 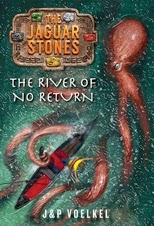 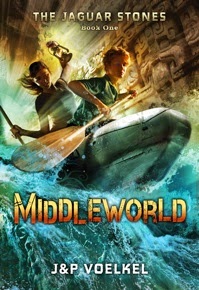 I have one copy of each book in The Jaguar Stones series up for grabs! For your chance to win: post a comment to the blog. Please include first name, city, state and comments. Deadline for posts is February 23 at noon MST. The winner will be chosen randomly by Randomizer. The winner will be contacted on Feb. 23 shortly after 12:00 noon MST. Please check your email at that time. The winner has 25 hours to respond to my email. Books will ship from New York. Good luck and start posting!


About The Jaguar Stones, Book Four: The Lost City

Ages 10 and up
The epic conclusion to the exciting Jaguar Stones series and a rip-roaring adventure into the heart of America!

With his parents in jail and the Maya Death Lords in possession of all five Jaguar Stones, fourteen-year-old Max Murphy is pretty sure that he'll never get to leave the 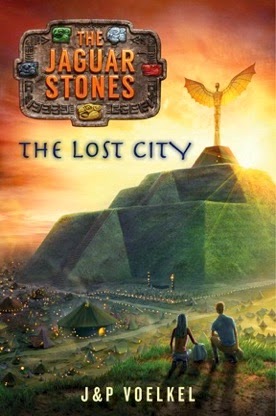 But the Lords of Death have a problem--a new king calling himself Great Sun claims to have the Jaguar Stones, too. And they want Max to prove the guy's a fraud. Or else.

Now, Max, and Lola, the mysterious girl who befriends him, are off on another wild adventure that will take them from Central America to New Orleans and up the Mississippi to the lost city at the heart of America's past.

But one thing Max should have learned after all of this dealings with the Death Lords -- they never keep their promises.
Praise for the book:


★"Suspense and intrigue, human sacrifice, smuggling, and secret doors and escape routes through pyramids ensure that the novel, the first in a projected trilogy, is likely to win legions of fans."—School Library Journal, starred review of The Jaguar Stones, Book One: Middle World

"This fast-paced action-adventure novel surpasses its prequel, and is filled with Mayan folklore and entertaining humor that will keep teen readers highly entertained. The End of the World Club is an easily recommended novel to pique the interests of adolescent readers in history and mythology."—The ALAN Review review of The Jaguar Stones, Book Two: The End of the World Book Club
Authors' Interview: Pamela T. asks Jon and Pamela V. interview questions:

PT:  You both have lived, worked and traveled to many places. What is the scariest thing that you have experienced and where did it occur?


Jon's scariest moment was either getting lost in a pitch black labyrinth under a Maya pyramid at Yaxchilan in Guatemala, or being in the top carriage of a ferris wheel in Colombia when it started to fall apart; Pamela's was either opening a hotel room door to be confronted by a wall of flames, or being interviewed by Al Roker on the Today show.


PT:  Where is the ONE place you still would like to visit and why?

Pamela would choose the ancient Maya site of Copan in Honduras, to see the famous ceremonial stairway.

Jon would choose King Pakal's tomb deep in the Temple of the Inscriptions in Palenque, Mexico. We've been to Palenque many times, but the tomb is permanently closed to visitors.


PT:  After the Jaguar Stones, what is your next book or books?


We'd love to tell you about it because we're really excited, but we don't want to jinx it by talking about it!


PT:  What books are your favorites from childhood? From your teens?

Pamela's are A Little Princess, the Ballet Shoes books, The Phantom Tollbooth, The Owl Service, Wuthering Heights and (a bit nerdy for a teenager she admits) Ulysses by James Joyce.

Jon's favourites were Where The Wild Things Are, the Narnia books, The Hobbit and The Lord of the Rings.


PT:  If you could meet and have coffee or dinner with any other writer who would it be and why?

Pamela: "I had the huge honor of meeting Judy Blume once and I was so starstruck, I couldn't say one word to her. So I think I'd give up on civilized conversation and choose Frances Hodgson Burnett, just so I could tie her up and force her to add a handwritten paragraph to my copy of A Little Princess, saying that Captain Crewe did in fact come home safely a few weeks later."

Jon: "I can imagine the scene exactly. I would have dinner in a seafront restaurant in old Cartagena with my hero, Gabriel Garcia Marquez. I'd like to know what was real and what was imaginary in A Thousand Years Of Solitude. Like him, I grew up in Colombia. It's such a mysterious, magical place that I suspect a lot of the so-called magic realism is actually based on day to day life."


PT:  What is THE best thing about writing for middle grades?


Neither of us can imagine writing for a different age group. Middle grade readers are an author's dream. They're young enough to suspend disbelief and come with you on fantastical adventures; but they're old enough to follow relatively complex plots.


PT: You've met thousands of readers in person and on your website; what are some lessons you've learned from young people?


First of all, it has to be said that our Jaguar Stones readers are AMAZING! They write to us all the time with questions and plot ideas and artwork. Sometimes they send us their own manuscripts. One thirteen-year-old girl we met on a school visit has already written three full length novels. So I think it's important never to talk down to kids - writing is equal parts frustrating and exhilarating at any age. We learned early on never to try and fudge the details. Middle schoolers spot every mistake, every inaccuracy, every implausible plot point and it spoils the whole book for them. If it's not authentic, they won't buy into it. We're very aware that our readers have a lot of competing demands on their time. It's our job to keep them riveted from the moment they pick up our book. If we lose their attention, that's our fault not theirs. When we're plotting out chapters, we like to imagine kids wearing headlamps to read under the covers after lights out because they just HAVE to know what happens next.


PT:  How did advertising prepare you for your writing career?


Advertising is all about focusing on the consumer. And writing for middle grades is all about focusing on your readers, keeping them always in your head while you're working, thinking about the words they use, imagining their reactions. From Pamela's point of view, as a former copywriter and creative director, writing ads taught her about meeting deadlines, writing to length, ruthless self-editing, and taking feedback. Jon was the Planning Director in the agency, so he's a whizz at marketing strategies. These days, of course, he's illustrating and his mixed media techniques owe a lot to design tips and skills he picked up in the agency. A common saying in advertising is "Give me the freedom of a tight brief," meaning that the more tightly defined your objective, the more creative you can be in meeting it. An open brief might sound more fun but it's actually because your brain has nothing to grab hold of. In the same way, writing fantasy books within a framework of historical fact, in our case Maya archaeology, sparks off so many "What if..." ideas for plots and characters.

PT:  If you could have any other job besides writing and advertising, what would it be and why?


Pamela: Writing is my dream job, I've wanted to be a writer ever since I was little. When I'm writing, I watch the action in my mind and try to describe what I see. It's like being a film director in my own head. So I'd like to try being an actual film director.


Jon: Lead guitarist in a rock n roll band. (Which was my actual job for two heady years.)


PT:  What lessons did your parents teach you that you have instilled in your own children?


Pamela: We had no books in our house - so I've made sure that my own children have grown up surrounded by them!


Jon: My parents taught me all the important things like the joy of reading, the value of education, a love of travel, the best recipe for ebelskivers (my mom's family is Danish) - all of which I intend to pass on.

About J&P Voelkel
Jon Voelkel grew up in Peru, Costa Rica, and Colombia, all the while dreaming of a boring life in suburbia. Eventually, having survived monkey stew, an attack by giant rats, and a plane crash in the jungle, he rolled up his hammock and decamped to Europe. Meanwhile, growing up in a sedate seaside town in northern England, Pamela Craik Voelkel was dreaming of travel and adventure. The pair met in London, where they both worked in advertising. They went on to help found an award-winning agency, for which Jon was named one of the fifty most creative minds in Britain by the Financial Times. The authors' first book in the Jaguar Stones series, Middleworld, was an Al Roker Book Club pick. The Voelkels now live in Vermont with their three children. You can visit them online at www.jaguarstones.com.
Posted by Pamela Thompson at 6:00 AM