"Mystical, magical and ethereal...a compelling tale of desert magic, dangerous government secrets, the all-in chemistry of first love and the power to control the world of dreams." --from the cover, Young Adult Books--What We're Reading Now 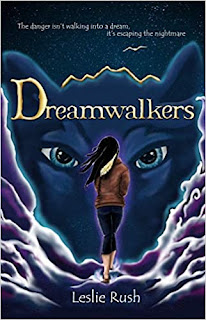 Mystical, magical, powerful and ethereal, Dreamwalkers is a compelling tale of desert magic, dangerous government secrets, the all-in chemistry of first love and the power to control the world of dreams set in an enchanted land where rugged, often unforgivable, terrain hides danger and government secrets are safe.

Sixteen year old Vivan Night Hawk is working in her mother’s crystal and tarot shop in the tourist-friendly square of tiny Zia, New Mexico. After a worn leather jacket arrives in the shop, Vivi claims it as her own because it reminds her of her father. One lone feather in the pocket holds a special magic. Vivi begins dreaming more detailed and vivid lucid dreams. Vivi learns her power to dream is handed down from her Apache father. She practices controlling her dreams, stepping in and out of them, and seeing her (dead?) father who warns her that her genius little brother Brian is in danger. Dad tells her bad people are coming for Brian because they believe he is the dreamwalker, not VIvi. Vivi meets cute guy Lucas who also shares the power of lucid dreaming. He tells Vivi both of their fathers are MIA or presumed dead. Lucas convinces Vivi that their fathers are alive, and using their powers of lucid dreaming, they have to find out what happened to them. The closer the two get to answers, the more danger they are in. It is not only bad people trying to control them. A decades old secret government project surfaces, and the kids are in a fight for their lives.

Dreamwalkers is set in a color drenched, panoramic tourist town in the mountains of New Mexico, and brought to life with lush details: the scent of sage, mesquite, pinon, and cottonwoods.The author captures the beauty of mountain sunsets and the threatening power of a desert thunderstorm. Dreamwalkers captivates readers with enchanting imagery and the slippery magic of New Mexico as the author uses broad brushstrokes of prose and descriptive hues evocative of master painter (and New Mexico favorite) Georgia O’Keefe.

Highly, highly recommended for fans of romance, YA fans, and any reader who loves an evil and corrupt government cover-up and a great story. For middle school and older. No sexual content. A few sweet kisses.

Posted by Pamela Thompson at 8:53 AM