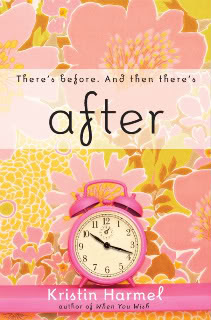 "There's before. And then there's after."

Lacey didn't mean to take so long primping in the mirror. Oh, maybe she wanted her brothers to complain. It was all part of the Saturday morning game they played. Lacey and her brothers have breakfast with their dad every Saturday morning giving their mom "mom" time alone. This ONE Saturday would be forever burned in Lacey's memory. If only she had been on time. If only she had seen the car sooner. If only she had yelled to her father. Maybe the accident wouldn't have happened. But, it did. Now, Lacey carries the weight of all the guilt of her father's death.

Lacey is "the girl whose father died." No one at school knows how to act around her. She is alone and feels out of place. One day, the school counselor asks Lacey to talk to another girl who has lost a parent. Kelsi's mother has just died of cancer, and the school counselor thinks it is a good idea for both girls to "help" each other.

Just talking to Kelsi helps Lacey feel better. She realizes that there are more students who have lost parents and feels the need to reach out to them. A new boy named Sam comes to their school, and Lacey has feelings for him, too.

After--yes, pun intended, her father's death, the family dynamic is totally out of whack. Because her father seemed to be the glue that held the family together, they drift apart. Lacey's mom becomes a workaholic who never even notices her kids need her--now more than ever. Lacey's older brother Logan has anger issues. Her younger brother keeps all his feelings inside and won't talk to anyone. Slowly, because of the group, Lacey is able to deal with the fact that her dad's death really wasn't her fault. Readers will like Lacey--a girl who is able to turn a horrible tragedy into a healing process, not just for herself, but for others as well.

After is a compelling read. Recommended for all YA collections. Grades 7-high school. It does mention teens drinking at a party and drinking and driving, but the characters take care of each other and do not let friends drive drunk. Harmel wrote this novel after meeting Kate Atwood, founder of Kate's Club, a club in Atlanta, Georgia, formed to help young adults who have lost a parent.

Posted by Pamela Thompson at 10:18 AM No comments: 282 pages
Imagine Diary of a Wimpy Kid but from a girl's point of view. Nikki J. Maxwell desperately wants to fit in with the CCP (cute, cool and popular) group at her new school. She finds herself a total outsider and learns to hate MacKenzie Hollister, the most popular girl in the 8th grade. MacKenzie is everything that Nikkis is not: pretty, confident, rich, and ruthless.
Nikki finds that in order to be popular, you MUST have a very cool cell phone. Poor Nikki is suffering from a terrible teen-age disease: nocellphoneaphobia--the irrational fear of NOT having a cell phone.
Nikki is a wonderful character. Full of middle school knowledge, like how to make faux puke so your mother will let you stay home sick from school and how to fashion a hearing aid into one of those "cute cell phone thingies," Nikki is a fun protagonist. Blessed with a real talent in art, she soon becomes popular because she can draw the most fabulous "tattoos." Pretty soon, all the football players, cheerleaders, HOT guys, and popular girls become her "friends."
Nikki is at her most fabulous when making observations about life. "After reading Twilight She had learned that forbidden love, obsession, and sacrifice could be very messy things. Just like snot." (p. 186)
With illustrations by Lisa Vega.
Recommended for YA collections grades 7-up.
Posted by Pamela Thompson at 3:05 PM No comments: