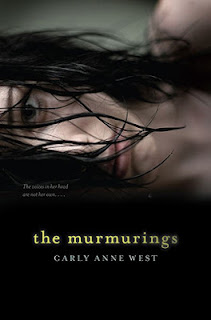 Sometimes a book is so strange, so chilling and creepy, it stays with you. The Murmurings is that book. Be forewarned.

Sophie's sister Nell is found dead and Sophie knows it wasn't suicide. Nell kept hearing voices in her head before she was admitted for treatment to Oakside. She ran away  from the hospital and was found hanging upside down from a tree near an old ghost town. Sophie misses her once popular and beautiful sister; she worries that she might be going crazy, too. Sophie is starting to hear the murmurings and she can't concentrate or sleep.

Sophie wishes her mother would snap out of it. Since her sister's death, her mother has turned to alcohol and depression, rarely leaving the house, forgetting to eat, and barely existing. Sophie can't turn to her mother for help because her mother is not cognizant.  Evan, a football player from school, shows interest in Sophie--they study together and have a picnic; Evan reveals he has lost his cousin Deb; she was once a patient at Oakside, too. Evan and Sophie begin to investigate the hospital.

Just what is going on at that "hospital?"What secrets did Nell uncover? Did someone from the hospital kill Nell? Evan show Sophie a blog he's discovered online that explains the murmurings and exposes the hospital and evil Dr. Keller. Sophie decides to get answers, putting herself in grave danger and opening a door for the Takers. When Sophie realizes  the secret identity of a patient  known only as MM, she can't wait any longer. If she doesn't save MM right now, MM may die.

The Taker reminds me of Harry Potter's deatheaters, both in appearance and behavior--the Taker is horribly grotesque and evil. It feeds on the soul and kills its victims.

Recommended for readers who love creepy books grade 9-up. No sex. Some language. F-bomb. Mature situations.


Posted by Pamela Thompson at 7:00 AM