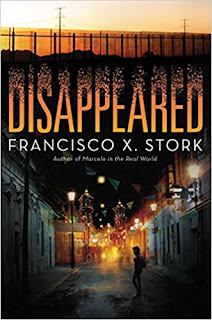 Disappeared unfolds through two alternating voices: Sara, a reporter for El Sol, a Juarez newspaper and Emiliano, her younger brother, a high school student. Set on the Mexican border where violence is often a part of life, Sara crusades against the disappearances of a number of young girls. Her best friend disappears on her way home from work. Many of the young women are sold into sex crimes and used by the cartels. As Sara delves deeper into the story, her boss at the newspaper becomes increasingly concerned for her and her family’s safety. It is dangerous to publish stories about the violence.

Emiliano is an All Star soccer player at school. He provides for his mother and sister stepping into the role of man of the family, a role  left vacant after his father deserted them. As a Jipari (boys scout) Emiliano has created a Folk Art Business by selling piñatas to be sold across the border and made by other Jipari friends.  As corruption grows in his neighborhood, Emiliano faces a tough decision regarding his business. Will he choose the right path for himself and those that he loves and cares about or will he risk it all for financial stability?

Highly recommended grade 9 and up. This story hits very close to home for millions of Texans who share the border with Mexico. The cartel violence is all too real. The instances in this YA novel are cut from the headlines, and that makes this novel all the more important.

FTC Required Disclaimer: I received the ARC from the publisher. Neither I nor my guest reviewer received monetary compensation for this review.
Posted by Pamela Thompson at 12:59 PM