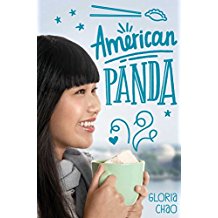 Tender, heartfelt, and oh, so needed, American Panda delivers a sweet story about learning who you are and finding your voice even if it means disappointing your family or worse, breaking apart your bonds.

Seventeen year old Mei Lu is a freshman at MIT. She is younger than everyone she meets and she doesn't volunteer her age. Her parents have pushed her into studying medicine, but Mei is a germ-a-phobe who carries hand sanitizer everywhere. Her Chinese born parents are traditional and  have sacrificed and worked hard to give Mei and disowned older brother Xing an easier lives in a country of opportunity.

As children, Mei and Xing are expected to be dutiful and respectful. This includes following their parents' life plan for each of them. They must marry a good candidate from a Chinese family. Xing must become a doctor or other profession that can make tons of money. As a girl, Mei's spouse must be able to provide for her. This means Mei must marry a doctor or in the very least, a professor. Not as much money, but the prestige factor is enough. Mei's mother makes matchmaking her first priority (remember Mei is only seventeen). Xing makes the mistake of falling in love with a woman who may have trouble conceiving a child. It is of the utmost importance to Mei's father that his own son has a son to carry on the Lu name. Her parents disown Xing and kick him out of the house.

Living in the dorms at MIT, Mei doesn't have the privacy she had hoped for. Her parents know her school schedule by heart. If she doesn't return their phone calls or texts, they want to know where she is and who she is with. Mei's mother is the epitome of a tiger mom. Mei's roommate is Nicolette, and they start off barely tolerating each other. Mei misses her brother who is now a doctor. She longs to speak with him about her own fears: her fear of germs, her hatred of biology, her fear of speaking up to her father. Mei begins to meet Xing in secret.

When Mei finds herself having feelings for two very different, NON-Chinese boys, she keeps that secret as well. Another secret is that Mei has been teaching traditional Chinese dance classes and she loves it. Dancing is her passion, not medicine. Too many secrets are spilling over until Mei finally tells the truth.

American Panda is the story of many first generation Americans whose parents have immigrated from other countries. It is not an Asian story (although it is). It is an immigrant story that so many teens will find themselves in. Whatever country their parents came from, it is likely their parents are traditional in their thinking and customs. The American born children grow up in America and hear about their parents' struggles, but it is not the children's story.

Highly, highly recommended, American Panda is a MUST read. Grades 8 and up. Some profanity. 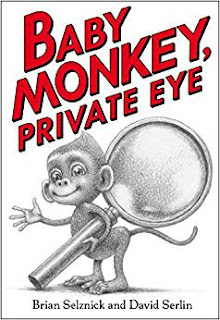 Brian Selznick continues to amaze readers--both young and old, artists and art lovers with his black and white (and red) illustrations that depict a range of emotions and pack a wealth of  information in each illustration. Baby Monkey, Private Eye reads like a picture book, but the art makes it a graphic novel and an art study. Targeted audience is ages 4 and up, but younger children will love Baby Monkey's antics, his struggle to put on his pants for each case, and his wide-eyed wonder captured so brilliantly by Selznick.

The repetitive nature of the text makes it an easy read and first time readers will guess what will happen before the page is turned. That is fun and also a treat when they discover that sometimes the repetition changes. At 192 pages, it is a longer read for the  youngest readers but they will discover more and more with each reading. Baby Monkey takes on each case, and the decor art in his office changes. For the opera jewelry theft, paintings and art are: singer Maria Callas, A Night at the Opera (Marx brothers), and a bust of Mozart.

Baby Monkey, Private Eye is a joy to behold and a triumph of mixing art, storytelling and elements of both picture books and graphic novels. Selznick continues to deliver books that defy pigeonholes and genres.

Highly, highly recommended and a MUST!

Ages 3 and up. This book is several art/history lessons.

FTC Required Disclaimer: I received the ARC from the publisher. I did not receive monetary compensation for this review.
Posted by Pamela Thompson at 8:21 AM No comments: 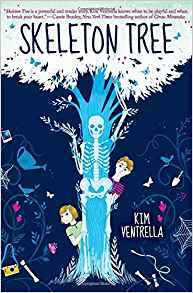 The Skeleton Tree is a middle grades book perfect for reluctant readers by debut author Kim Ventrella. Chapters are short making it an excellent choice for reading clubs and classroom reads.

Stanly is dealing with a ton of problems: his parents are recently divorced, his mother works too much,  and his younger sister has a terminal illness. There is comic relief in interactions with their caregiver who is from Kyrgyzstan.

At one of his sister's many doctor appointments, Stanly reads about The Young Discoverer's Prize. He is excited because he thinks he can win with a photo of a weird growth on the tree in his back yard. It appears that the tree is growing bones! Stanly can save his whole family. With the prize money in hand, his archeologist dad will come back home and Mom won't have to work too many jobs. His sister will get more attention and the caregiver from Kyrgyzstan won't have to visit again.

When Stanly's best friend Jaxon takes of photo of the tree, the kids can't believe the bone aren't visible. No one can see the skeleton but kids, and they can't see it in photos. Just what is happening to the tree and why?

Ventrella mixes pre-teen angst, real-life drama, mystery and the supernatural in The Skeleton Tree. This is an angel-of death spin done well for middle grades.

Recommended grades 3-7.This book is available on Scholastic Book Fairs.

FTC Required Disclaimer: I received the ARC from the publisher. I did not receive monetary compensation for this review nor did guest reviewer Lisa Lopez.


Posted by Pamela Thompson at 9:17 AM No comments: