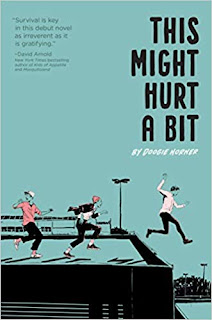 Kirby Burns is dealing with life, sort of. Since his sister's death a year ago, his family has moved to Upper Shuckburgh, a town so small, there's more cows than people. Kids who live on the rural route ride the bus to school, as Kirby does. Neighbors are distant, but the nearest neighbor owns three "horse dogs" which terrorize Kirby as he waits for the bus each morning.

Lucky for Kirby, two nearby boys become his friends. The three friends get into mischief and teen vandalism. One night when they are attempting to paint a farmer's cows, they almost get caught. They get away, but someone recognized Kirby.

That minor event sparks revenge and wrath unleashed on Kirby and his friends. He's so busy running from bullies, he doesn't deal with his grief. His parents give him an ultimatum: let read them read his notebook or he can read it to them. He has a deadline to decide.

When Kirby finally breaks, his grief spills out and the family begins to heal.

This Might Hurt a Bit begins as a cheerful romp of teen shenanigans and slides into bullying, fighting and assault. Finally, Kirby faces his sister's death, and the subject of grief which is beautifully handled by the author.

Kirby's friends PJ (the stealthy ninja with a mad backpack full of tricks, a la "The Goonies" and Jake, the dark goth loner kid, are memorable characters readers are unlikely to forget.

FTC Required Disclaimer: I received the book from the publisher. I did not receive monetary compensation for this review.

Posted by Pamela Thompson at 1:34 PM