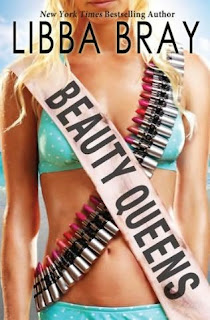 Beauty Queens
by Libba Bray
Scholastic Press
2011
page count not yet determined, the arc had 396 pages
Hardcover available May 24, 2011

Quick, biting, satiric, sardonic, and sophisticated, Beauty Queens is Libba Bray's best young adult novel to date. Bray is the queen of the one-two punch and is the teen set's David Sedaris.

Teen contestants from across the United States are on board a jet carrying them to a beach destination where they will set up a photo shoot. The plane goes down killing the camera crew, pilots, adult sponsors, and many of the contestants. Miss Texas (of course, Miss Texas, who else?) Taylor Rene Crystal Hawkins takes over as the leader of the few Teen Dream contestants left alive. You can almost hear the twang in her voice when she tells the other girls what to do and continues to grill them on their pageant practices.

The girls are ill-prepared and even less equipped to last long on an island where they have no electricity, no running water, no spray tans, and no beauty parlors. First they lament their lack of necessities like hair extensions and shaving cream; then they get busy creating an existance, still hoping someone is looking for them and that they will be saved soon.

Meanwhile, the island is a hotbed of smuggling and weapons deals: the Corporation--the same company that sponsors the Teen Dream Pageant--is selling weapons to Mo Mo Be ChaCha, ruler of the Republic of ChaCha. The girls' presence on the island must be dealt with; no one can risk the eyes of the world on the island and the rescue of teen-age girls--much less nubile beauty contestants lost at sea who overcame great odds and built a civilization of their own. Imagine the headlines! Beauty Queens Spoil Arms Deal!

Bray's footnotes are hilarious. About Che Guevara, she writes, "the Argentine Marxist revolutionary who later became a best-selling t-shirt icon."

When Miss New Mexico exticates herself from the plane, an airline food tray is lodged in her forehead. As she is crying and begging the girls to remove it, Taylor suggests that she just grow bangs to help hide the tray!

Later Taylor says, "Let's not speak ill of the dead, no matter how hideous their fashion sense," referring to Miss Massachusetts' choice of evening gown.

State stereotypes abound and Bray has fun with them. Audina, Miss Ohio, tells the girls, "I'm from the Buckeye State. We are serious about our tailgating parties. I can turn ANYTHING into a grill."

Teens and adults who love satire and lunacy will love Beauty Queens. It reminded this reader of "Idiocracy" the film that made fun of how stupid Americans have become. Reality television has corrupted our thinking, and Bray has fun pointing this fact out.

FTC Required Disclaimer: I received this arc from the publisher. I did not receive any monetary compensation for this review.
Posted by Pamela Thompson at 10:44 AM

Email ThisBlogThis!Share to TwitterShare to FacebookShare to Pinterest
Labels: . ya, high school, satire