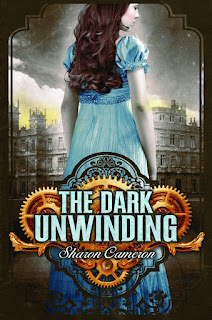 Gothic, gorgeous, glooming and grand, The Dark Unwinding will captivate teen readers with its spunky heroine Katharine Tulman and her deep and dark family secrets. Katharine slaves over keeping the books for her witchy Aunt Alice until Aunt sends her to the countryside to her uncle’s estate on the windswept and lonely moors. Katharine is to find proof that Uncle Tully is batty, so that he can be sent away to an asylum and Aunt Alice and her greedy, gluttonous son Robert (Katharine’s cousin) can inherit the family fortune. Katharine feels she has no choice, since she is reliant on Robert and Alice to provide her with room and board. She has no money of her own and no other family.

Upon arriving at Stranwyne Keep, Katharine takes in the monstrous, looming Victorian palace and its grounds. Mrs. Jeffries, the cook, is dismissive and rude; Uncle Tully is nowhere to be found and Davy, a little waif of a boy, is a silent enigma. Katharine spends a restless night in a spooky red room, and vows to meet her uncle in the morning.

Uncle Tully’s workshop is a fantastical, whimsical place where creativity and invention thrive. He has created amazing puppets, steam powered machines, and inventions that no one has ever seen before. Katharine finds that Tully is not demented; he is a genius! He does have quirky habits that may seem strange to some people: he only winds his clocks on specific days, playtime is on a regimented schedule, and Tully can do the most difficult math problems in his head in less than a second. When Katharine discovers that her uncle employs over 900 men to work in his village and keep the workshop running, she vows that she will shut it down. This is Fat Robert’s inheritance, after all.

A strange turn of events finds Katharine torn between her family—she has come to love eccentric Uncle Tully and even mean Mrs. Jeffries, she feels protective of Mary, her constant companion, and she is attracted to Lane, her uncle’s helper. Can she offer the proof that will put her uncle in the loony bin? What will happen to Stranwyne Keep and all the people?

This luscious novel has all the elements that romance readers could want. Think Jane Eyre with a bit of steampunk thrown in. A spooky, creaky mansion, deserted moors, howling winds at night, crazy machines and inventions, a mean housekeeper, a silent orphan, a poisoning, a plot to send Katharine to the asylum, a childlike, genius inventor, a handsome helper, a wolf in sheep’s clothing (a villain), a plot to destroy England, and a wee bit of romance.

Highly, highly recommended for fans of steampunk and romance. This is a remarkable read that is not to be missed. Grades 7-up.

Posted by Pamela Thompson at 9:54 AM