Non-Fiction Pick: Who Were the Navajo Code Talkers? 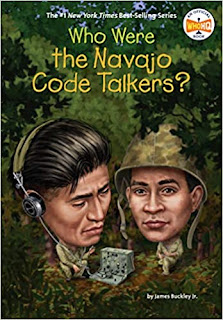 Who Were the Navajo Code Talkers?

When the U.S. become involved the World War II, the Axis powers were already taken huge parts of Europe. The marines recruited twenty-nine men who could speak the Navajo language. Their code saved missions, men and countries. Their "code" was never broken, and no one knew about their secret mission until twenty-five years later.

The Navajo have lived in the southwest over one thousand years and called themselves Diné (dee-nay). The history of the Navajo Nation is addressed including their horrendous treatment even after serving in World War I. The Navajo now reside in the four corners area: where New Mexico, Utah, Arizona and Colorado meet. Over 14,000 Navajo served in WWI and 540 served as Marines in World War II, twenty-nine of them in the Navajo Code Program.

Their job was to choose Navajo words which would represent letters of the alphabet; for example: N is nesh-chee, or nut. The men had to memorize each letter quickly and translate messages back and forth to demonstrate how it could be used to pass along secret information.

Highly recommended for every school and classroom library. Great read for reluctant readers and fans of World War II. A powerful book celebrating heroes of this country.

Posted by Pamela Thompson at 12:02 PM